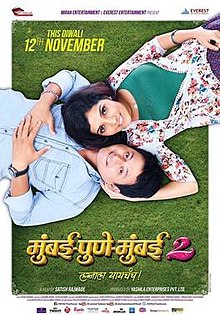 Movie Plot: A sequel to the 2010 film ‘Mumbai-Pune-Mumbai’, this one revolves around the marriage preparation of the lead protagonists.  Dark clouds appear on the horizon for a couple as they prepare for their much-awaited wedding.

It is the sequel to 2010’s superhit Marathi film Mumbai-Pune-Mumbai.[4] Directed and written by Satish Rajwade, the film stars Swapnil Joshi, Mukta Barve in lead roles and Prashant Damle, Mangal Kenkre, Vijay Kenkre, Savita Prabhune, Asawari Joshi, Shruti Marathe, Suhas Joshi in supporting roles.[5] The screenplay and the dialogues were written by Ashwini Shende. The film score and soundtrack album are composed by Avinash-Vishwajeet with lyrics are penned by Shrirang Godbole, Ashwini Shende and Vishwajeet Joshi[6] and cinematography by Suhas Gujarathi. Subhash Nakashe is the film’s choreographer while the editing was done by Rajesh Rao.

The principal photography began in February 2015 and the film was released on November 12, 2015. The film marks as the most awaited film in Marathi